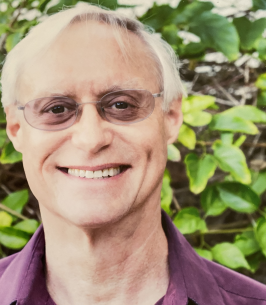 Steve Gould passed away on November 12, 2021 due to complications following a lung transplant. Steve was born in New York City to Robert and Ruth Gould, and lived in Washington Heights until he was 10. He had one brother, Jay Gould, who was 3 years older. The family moved to Los Angeles in January 1956, and Steve grew up a Southern Californian. He attended University High School, then graduated Cum Laude from UCLA in 1966 at the age of 20, majoring in Chemistry. He attended MIT from 1966-1970, earning a PhD in Organic Chemistry under the direction of Prof. George Buchi. Steve lived in Zurich, Switzerland, from 1970-72 as a Postdoctoral Research Fellow with Prof. Duilio Arigoni. He had a Fellowship from the American-Swiss Foundation for Scientific Exchange. He was married in 1972 and divorced his first wife in 1979.
Steve had a long and rewarding scientific career. Following his Postdoctoral work, he was employed by Syva Research Institute in Palo Alto, California from 1972-74. In 1974, he was appointed Assistant Professor of Natural Products Chemistry at the University of Connecticut, School of Pharmacy, and in 1981 he was appointed Associate Professor in the same department. He was a member of The American Chemical Society.
In 1982, Steve returned to the West Coast with an appointment as Associate Professor of Chemistry at Oregon State University, Department of Chemistry, advancing to Professor there in 1983. At OSU, Steve established a large research group studying antibiotic biosynthesis. In 1991, he was awarded the College of Science Milton Harris Award at OSU. He was a consultant to numerous pharmaceutical companies, including Lederle Laboratories and Novo Nordisk.
A blind date in 1986 brought Mary Marshall into his life. Steve introduced Mary to Judaism and SCUBA diving, and Mary introduced Steve to folk dancing. Steve and Mary were married under the chuppah in Corvallis, Oregon in 1988, and their wedding included Klezmer, Swing, and folk dancing.
From 1989-90, Steve took a Sabbatical funded by a Fulbright Fellowship at the John Innes Institute in Norwich, England, where he learned the molecular genetics of antibiotic-producing Streptomyces bacteria. He incorporated this work into his research group upon returning to OSU. In his time off work, Steve and Mary made the most of their year in the U.K. by traveling around the country, and making friends who remained close for the rest of Steve’s life. They returned to England many times in later years.
In 1997, Steve accepted a position as Executive Director of Natural Products Drug Discovery, Merck Pharmaceuticals, in Rahway, New Jersey. In 2002, he became Chief Scientific Officer of Mera Pharmaceuticals in Kona, Hawaii, and San Diego, California. Due to professional circumstances beyond his control, Steve retired in 2003 in San Diego.
Not content to be retired, Steve reinvented himself in 2004 with a very successful new career as a landscape and wildlife photographer, establishing Steve Gould Photography. He was active in the San Diego art community and showed his work in galleries and exhibitions. Some of his images can be viewed online at www.stevegouldphotography.com In 2015, he was the photographer for a book called “San Diego, California: A Photographic Portrait” which was published as part of a national series.
Steve was active in the San Diego Jewish community, and a member with his wife at Congregation Beth Israel. He and Mary were members of the Chavurah Shabbat there.
Steve loved to travel, and he and Mary went on many adventures, including three times to South Georgia and Antarctica, a safari in Africa, and tours in Alaska and Europe. SCUBA was a major love, and they went diving in many of the most beautiful locations around the world: the Galapagos Islands, the Maldives, Indonesia, the Caribbean, Palau and Yap Islands, the Red Sea, the Sea of Cortez, and Hawaii.
Steve is survived by his wife of almost 34 years, Mary Marshall, by his nieces Robyn Siers and Jamie Shatwell, Robyn’s husband, Bret, and his grand-nephews Bret, Tyee, Lukas and Jaxon Siers and Miles Shatwell, and by his cousins Deborah Krass, Stephanie and Don Bryan, Tamara Bryan Murphy, Nathan Bryan, Garrison Singer, Rita Philipson, Jill Philipson, Sue Bloom, and Warren Winn. Donations in his honor may be made to the Congregation Beth Israel Hunger Project.