To share your memory on the wall of Howard Rubenstein, sign in using one of the following options:

Receive notifications about information and event scheduling for Howard

We encourage you to share your most beloved memories of Howard here, so that the family and other loved ones can always see it. You can upload cherished photographs, or share your favorite stories, and can even comment on those shared by others.

Posted Oct 05, 2020 at 02:27pm
Howard once told me that he had so much to look forward to in 2020. His musical “Romance of the Western Chamber” was scheduled for its San Diego premiere in July, and his “Prometheus Bound” was scheduled to be produced in NYC in September, and his eldest grandson would have his Bar Mitzvah in December.
Out of the blue he was diagnosed with stage four cancer, and then came the dreadful COVID-19 pandemic. With Judy’s loving care he was optimistic. In one of his text messages he said, “The isolation has the benefit of protecting terminal people from many different bugs that would normally kill them off when they were socially active. In that sense I may receive some protection.”
Fighting the cancer, he never lost his sense of humor. On his birthday in June, I wrote him a card saying, “Wish you long life 100 years.”  He immediately texted me back saying, “I thought long life should be 10,000 years. Why only 100 years?” He was knowledgeable about the ancient Chinese custom of calling the emperor “Wan Shui or 10,000 years.”
Early this year, Judy, Howard and I were invited to the Chinese Cultural Center of SDSU.  In one room, Dr Li-Rong Lilly Cheng showed us a variety of traditional Chinese costumes and said we could try them on if we liked. Howard was in high spirits and immediately picked up a robe and put it on as did Judy and I (see photo).
On New Year’s Eve last year, right after his diagnosis, with Nancy and Bill Dubey (see photo) and other fellow Pacific Regent residents, we sat at a large table to celebrate the event. Howard was cheerful in his tuxedo and tirelessly danced with Judy and gallantly asked some of us other ladies to dance. He was in high hopes of beating the odds and living through 2020, as were we all.
Was God playing dice with him? Giving him so much yet holding it back at the most important moment?
He will be missed by all of us.
Rosa Ovshinsky
Comment Share
Share via: 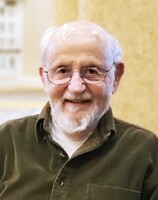