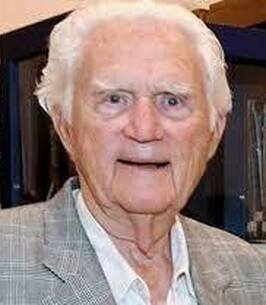 America's Greatest Generation is one fewer tonight with the passing of Arthur L. ("Art") Rivkin. He was 98. Art was born in Minneapolis, MN in 1924 to Ruth and Nathan Rivkin. He attended public school and the University of Minnesota but left to enlist in the US Army Air Force during WWII. He flew 25 missions as a B-24 co-pilot for the 8th Air Force based in England and finished the war with a Distinguished Flying Cross and five Air Medals. Returning to Minnesota, he finished his degree and while doing so met Jeannie Polinsky. They were married in 1951 and remained so for 71 wonderful years. They had three children, two of whom (Michael and Robert) survive him.
In 1959, Art moved his family to San Diego where he and his father-in-law A.B. Polinsky purchased the Coca-Cola Bottling Company of San Diego. Art served as president and was instrumental in growing the business into one of Coke's most successful franchises. It was sold to Beatrice Foods in 1983. Thereafter, Art embarked on a number of business ventures, including real estate ownership, radio broadcasting, and aviation storage. He was a founding member of the Greater San Diego Sports Association and a partner both in San Diego's first professional indoor soccer club and later the San Diego Padres. A boxer in college, he also co-managed the career of heavyweight champion Ken Norton during the height of Norton's career.
When not engaged in his various projects, Art was an avid golfer, tennis player, and saltwater angler. He was a longtime member of the La Jolla Country Club and San Diego Yacht Club and once purchased a boat that he brought around from Texas to California on its own bottom. He and Jeannie also traveled the world, often with good friends in tow, and was fortunate enough to visit many wonderful places. In later years, the two divided their time between La Jolla and Rancho Mirage where they had a home for more than 30 years. Hugely generous, Jeannie and Arthur together supported a wide range of charitable institutions and both served tirelessly on a number of boards. Art never met a stranger and leaves behind his wife, two sons, five grandchildren, and many other bereaved friends and family members. He will be sorely missed.